This article was originally published in the October 2020 edition of the 5 papers…in 5 minutes. 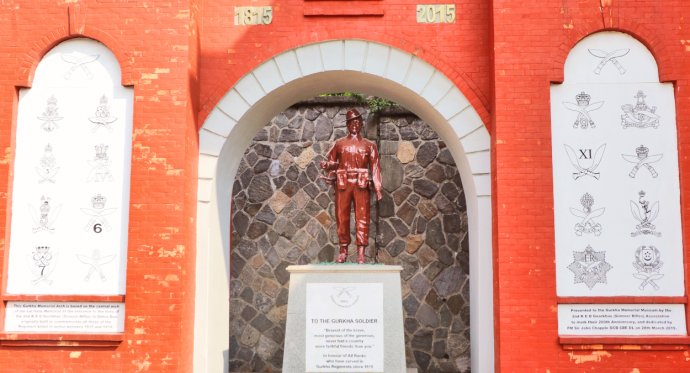 After the Gurkha War (1814-1816), British colonizers were so impressed by the fighting skills of their former enemies that the East India Company started to recruit Gurkha soldiers from Nepal – even if Nepal was never colonized. Hailing from the so-called Gurkha castes in small rural villages, the Gurkhas first served in the colonial Indian armies. After 1947, they continued to be recruited by the Indian and British armies. Gurkha soldiers maintained strong ties to their home communities, and would typically return to Nepal after retirement, only to be replaced by a younger generation of recruits from the same villages. Hence, Nepal’s Gurkha communities experienced institutionalized, long-run exposure to labour migration and military service. Historians often argue that this exposure was transformative, as remittances and experience gained abroad helped to boost local educational attainment. However, it is challenging to quantify these effects and to identify precise mechanisms of influence.

In this recent paper, François Libois, Ritu Muralidharan, Juni Singh, and Oliver Vanden Eynde use fine-grained data on development outcomes in Nepal to quantify some of the long-term effects of Gurkha recruitment. Their empirical analysis uses historical constraints on Gurkha recruitment. Recruitment patterns were established during the 19th century, and remained persistent as networks of existing soldiers were used to find new recruits. British recruiters had to rely on a limited number of recruitment centers. For political reasons, five of the six main depots were based in British Indian territory. The authors use distance to these historical recruitment centers as a measure for the intensity of historical Gurkha. To validate this measure, the authors show that locations that were closer to recruitment centres and had a higher share of Gurkhas in the population experienced more casualties in the World Wars.
The authors’ results indicate that in villages that are closer to historical recruitment centres, the Gurkhas are relatively better educated than the non-Gurkhas. This suggests positive long-term effects of Gurkha recruitment on education, confirming descriptive historical evidence. One explanation for this finding is that members of the Gurkha castes invest in education due to the educational requirements for military recruitment. Even if the recruitment intensity is much lower today than in the past, the Indian and British Armies still recruit from these communities. However, educational requirements have only been introduced quite recently and they cannot explain why women and older cohorts are more educated. Hence, the findings cannot solely be explained by the aspiration to join Gurkha regiments. The authors also investigate to which extent higher wealth of Gurkhas in recruitment grounds can account for their findings. While Gurkha groups tend to hold more assets in historical recruitment grounds, the positive impacts on education remain when they account explicitly for wealth differences. This finding is consistent with the idea that military recruitment changed the culture and preferences of recruited communities, as historians have long argued. In line with this interpretation, military recruitment appears to have improved female empowerment. Gurkha women in recruitment grounds are more likely to own non-agricultural businesses, they marry later, and they are more likely to use contraception.

Of course, this research does not offer a full cost-benefit analysis of Gurkha recruitment, and the authors acknowledge that the trauma suffered by soldiers and their families from serving in wars cannot be measured in their analysis. Still, the experience of Nepal’s Gurkha soldiers helps us to understand how colonial policies targeted at particular groups, like the Gurkhas in this case, have contributed to differences in human development outcomes between groups. In addition, the experience of Gurkha soldiers shares many similarities with the one of present-day labour migrants. From that perspective, the long-run evidence provided by the authors of cultural transmission, can help us understand how migration changes the culture in the communities of origin.

Published in : mimeo (WP to come)